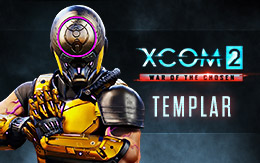 Meet the Templars, a faction of Psionic zealots in XCOM 2: War of the Chosen for macOS and Linux

War of the Chosen introduces three factions, pockets of resistance against the alien threat. The factions are unaffiliated with XCOM, so you must win them over to recruit their powerful soldiers.

The Templars are a group of monastic soldiers who use psionic energy to push their minds and bodies to the brink.

Since the fall of the XCOM Project, the Templars have isolated themselves and developed a religious zeal for collecting Psionic energy.

Templar units wield Psionic blades and use abilities triggered by “Focus”, a combat mechanic that builds over the course of a fight. Templars can increase their attack, defence and mobility by charging their Focus, or unleash it on the battlefield with devastating attacks such as “Volt”, which jumps to nearby foes at higher Focus levels.

With experience, Templars can master even more advanced Psionic skills such as warping reality to exchange positions with other XCOM soldiers on the map.

Buy XCOM 2: War of the Chosen from the Feral Store to encounter the Templars.

Please note: you must own XCOM 2 in order to play War of the Chosen.