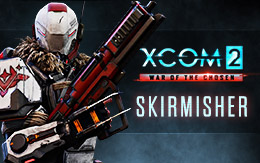 Meet the Skirmishers, a faction of defected ADVENT soldiers in XCOM 2: War of the Chosen for macOS and Linux

War of the Chosen introduces three factions, pockets of resistance against the alien threat. The factions are unaffiliated with XCOM, so you must win them over to recruit their powerful soldiers.

The Skirmishers are former ADVENT soldiers who have rebelled against their masters.

A Skirmisher unit is an offensive powerhouse capable of scaling structures and grabbing soldiers with their grappling hook, and using a wrist-mounted Ripjack to stab with deadly force.

Skirmisher units also come equipped with a custom Bullpup submachine gun, which they can fire twice in a single turn. They have several skills such as “Reflex” that allow them to take extra actions without ending their turn.

Buy XCOM 2: War of the Chosen from the Feral Store to encounter the Skirmishers.

Please note: you must own XCOM 2 in order to play War of the Chosen.