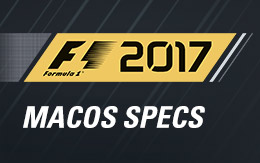 To run F1 2017 you will need a 2.0GHz Intel Core i5 processor running macOS 10.12.5, and 8GB of RAM. Selected graphics cards from AMD and Intel are supported, and the game is supported on all these Macs:

The Macs listed below are capable of running the game but do not consistently meet the standards required for official support. This means your computer will run the game, but is not able to get the best out of it in terms of performance, graphics and stability:

F1 2017 will be released later today. Visit the minisite to learn more about the 2017 FORMULA ONE™ season on macOS.