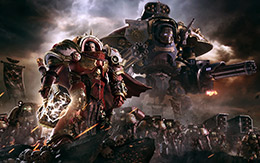 Pledge allegiance to the Space Marines in Warhammer 40,000: Dawn of War III for macOS and Linux

In Dawn of War III, step into a brutal battle as one of three warring factions. Alternate between command of the Space Marines, Orks and Eldar in the single-player campaign, and command your favourite to wreak havoc in cross-platform multiplayer between macOS and Linux.

So who are the Space Marines?

They are genetically engineered warriors on a ceaseless mission to protect the Imperium from the gravest threats in the galaxy. Encased in ancient power armor, they specialise in highly concentrated attacks and can quickly turn the tide of battle.

As the Space Marines, you can call up powerful Super Units like Imperial Knight Solaria, who unleashes earth-shaking assaults from her twin Gatling cannons. Explore this titanic combatant in the 3D model below:

Imperial Knight Solaria by Dawn of War on Sketchfab

Discover more about the iconic Space Marines in the trailer:

Warhammer 40,000: Dawn of War III is available for macOS and Linux on the Feral Store.