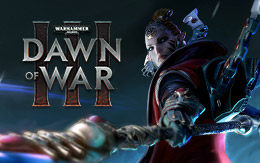 An immense war is coming this way. You’re going to need some gear.

On macOS, ensure you have a 2.0GHz Intel i5 processor running macOS 10.12.4 and 8GB of RAM. Graphics cards from all three vendors, AMD, Nvidia and Intel are supported, and we are happy to confirm that the game is supported on a wide range of Macs:

Warhammer 40,000: Dawn of War III will be released for macOS and Linux on June 8th.