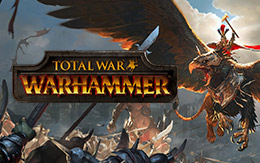 Enter an age of magical warfare with Total War: WARHAMMER on Linux

Total War: WARHAMMER has been loosed on Linux. Fight for dominion of the Old World as one of four fantasy races, each with its own legendary heroes and unique quests.

Soak up all the knowledge you’ll need from the minisite. To join battle, buy from the Feral Store.

The fantastical battlefields of Total War: WARHAMMER echo to the roar and clamour of man and beast alike. The only constant is war!