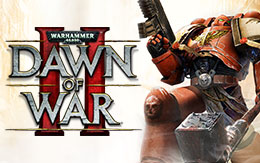 Warhammer® 40,000®: Dawn of War II®, Chaos Rising and Retribution all come to Mac and Linux on September 29th

The sinister science fantasy universe of Warhammer 40,000 springs to brutal life in a relentless war pursued by six rival races across the inhabited worlds of Sub-Sector Aurelia. Fight for the survival of your kind in Dawn of War II, Chaos Rising and Retribution, three outstanding games linked by the pitiless combat of implacable enemies.

Uncover their bloody history on the minisite.