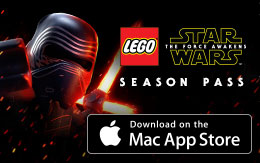 Go above and beyond with the LEGO® Star Wars™: The Force Awakens Season Pass, now available on the Mac App Store!

Exciting DLC for LEGO Star Wars: The Force Awakens has come to Mac! Get the Season Pass on the Feral Store or update your game on the Mac App Store.

The Season Pass features three brand new Level Packs extending the adventure with previously untold stories that can only be played in LEGO Star Wars: The Force Awakens. Each add-on pack allows players to experience key events from the film in different ways, including Poe Dameron’s journey back to the Resistance base after crash landing on Jakku, the assault on Maz Kanata’s castle through the eyes of Kylo Ren and the collapse of Starkiller Base from the perspective of two Resistance pilots.