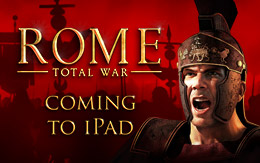 This autumn, build the Roman Empire from your iPad.

Guide one of eleven competing factions through three centuries of warfare in ROME: Total War. In a gloriously complete experience for iPad, seize and build an Empire through conquest and diplomacy with help from features designed specifically for mobile gaming.

We have settled a new province rich with information about ROME: Total War for iPad. Consult our scroll.