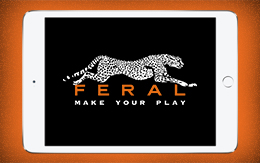 Feral wades headlong into the awesome and perilous world of iOS

We've been dying to tell you something, and it’s BIG. The Feral Interactive repertoire will now include games on iOS!

Join our first foray into this new landscape later this year with a classic game of epic scale. Stick with us and you'll have the world trembling at your feet.