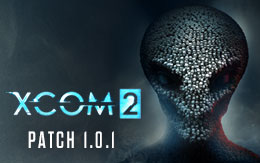 We're pleased to announce that the first patch for XCOM 2 on Mac and Linux is now live on Steam.

Patch 1.0.1 brings improvements to the frame rate and occasional in-level stutters, fixes an issue with mods not enabling on some machines, and resolves an issue where the player is unable to scan in the Geoscape after completing the Resistance communications research tutorial.

A number of Linux-specific fixes have been implemented with this patch as well. The changelog on Steam has full details for both the Mac and Linux fixes.

If you have automatic updates enabled in Steam – the default setting – then the patch will download when you log in.

XCOM 2 is out now on Mac and Linux and available from Steam and the Feral Store.