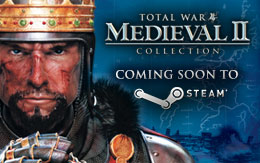 The Medieval II: Total War™ Collection gallops to Steam for Mac and Linux on January 14th

On January 14th, the Medieval II: Total War Collection brings its majesty to the Steam fiefdoms of Mac and Linux.

In this classic Total War game of real-time battles and turn-based strategy, you create your empire by ranging across a continental campaign, building cities and opening trade routes, mastering the art of diplomacy, and – oh, of course – leading your armies into history-defining clashes.