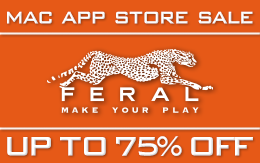 Huge choice, tiny prices. Up to 75% off games published by Feral at the Mac App Store!

11 September 2014
This offer has now expired. Keep an eye out for more offers by subscribing to our RSS feed and following us on Facebook and Twitter.

Whether you’ve been waiting for the perfect time to buy that coveted game or you’re just on the lookout for some great savings, today’s your lucky day because every Mac App Store game published by Feral* is up to 75% off for a limited time.

So if you’ve always wanted to become a superstar racer, build your way across a LEGO galaxy, defend the earth from an alien invasion or strike fear into your enemies as the Dark Knight, head to the Mac App Store today and grab yourself a bargain… or several!