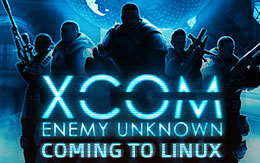 In the fight to defend Earth against its alien invaders, every scientific development is crucial in giving us an edge over our planet’s enemies. So we’re quietly thrilled to announce a significant breakthrough: Feral’s first game for Linux, XCOM: Enemy Unknown.

Linux gamers will be able to join the fight for humanity’s future this summer when the Ubuntu 14.04 version of XCOM: Enemy Unknown is released as a SteamPlay title.

To give new recruits every advantage in the field, all add-on content including XCOM: Enemy Within will be released on Linux at the same time. Our research notes have been archived on the XCOM: Enemy Unknown Steam information page.