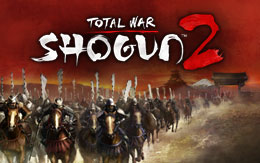 Master the Art of War in Total War: SHOGUN 2 for Mac

For 200 years the Ashikaga shoguns have ruled from Kyoto. Great splendour and power were theirs. Now the over-mighty clans no longer obey. The time has come for a new warlord to become shogun!

Prepare to stake your claim on the shogunate when Total War: SHOGUN 2, a historical strategy game that combines turn-based tactics with real-time combat, arrives on the Mac. As the leader of one of nine competing clans, use diplomacy, espionage and military brilliance to unify 16th century Japan under one undisputed ruler: you.

The road to Kyoto is narrow and long, so gather your strength while we assemble the Total War: SHOGUN 2 minisite.

Total War: SHOGUN 2 is a Creative Assembly game, developed and published for the Mac by Feral Interactive.