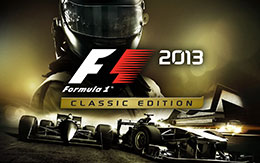 And they’re off! F1 2013, the official game of the 2013 FIA FORMULA ONE WORLD CHAMPIONSHIP™, is now available on the Mac.

Pursue the coveted World Drivers’ Championship in an epic recreation of the full 2013 season, and compete against the greats in F1 Classics mode, featuring legendary cars, drivers and circuits from the 1980s. Get the ultimate racing package with F1 2013: Classic Edition, a premium version which contains the 1990s Content and Classic Track packs.

Copies of the game purchased from the Mac App Store do not support SteamPlay, so will not contain online multiplayer. They will contain offline split-screen multiplayer as well as the full single-player game.

Race engineers are standing by at the F1 2013 minisite to provide full game details, media and system requirements, as well as multiplayer and DLC information.