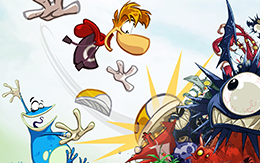 Out on a limb: Rayman® Origins arrives on the Mac

Get ready to wind up those telescopic fists and give evil a good smack because Rayman Origins, the wonderfully weird 2D platformer, is out today!

Yes, the limbless legend has returned to the Mac in this epically funny quest to save the Glade of Dreams from a nightmarish invasion of monsters. Leap into a world of magical nymphs, carnivorous plants and wacky wizards now at the Feral Store, Steam, the Mac App Store and other fine online retailers.

To find out more about the game and the strange characters you’ll run into on your adventure, spin your hair and hover over to the Rayman Origins minisite, where you’ll find game details, screenshots, character information and system requirements.