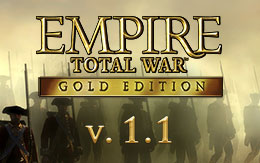 How fares the Empire?

Today heralds the release of Empire: Total War - Gold Edition 1.1, a free update carrying all the glory and excitement of the original game along with new elements forged in the furnace of hard fought combat over the last few months.

To download the patch, Mac App Store customers should visit the Mac App Store and click on the "Updates" tab. Everyone else can simply open the Empire: Total War - Gold Edition application and follow the prompts to update automatically.

If you’ve yet to stake a claim to Empire, there will never be a better opportunity to take part in the great game. Get your very own copy with the latest update already built in at the Feral store or the Mac App Store right now!

Empire: Total War - Gold Edition is a Creative Assembly game, developed and published for the Mac by Feral Interactive.