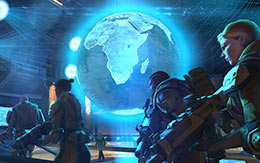 “Two possibilities exist: either we are alone in the Universe or we are not. Both are equally terrifying.”

Today, the awe-inspiring possibility that we are not alone in the Universe became an alarming certainty as our satellites picked up XCOM: Enemy Unknown - Elite Edition heading for the Mac.

An electrifying combination of turn-based tactics, global strategy and sophisticated role-playing, XCOM: Enemy Unknown - Elite Edition puts you in charge of the Extraterrestrial Combat Unit (XCOM), a top-secret military organisation responsible for defending Earth from an alien invasion. The Elite Edition, exclusive to the Mac, comprises the base game and all previously released DLC including the Slingshot pack, the Elite Soldier pack and the Second Wave update.

As our engineers pore over blueprints for the minisite, brief yourself on the threat facing you and your loved ones by watching the trailer.