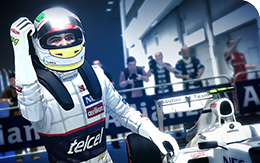 We’re pumped to announce that F1 2012™, the official game of the 2012 FIA FORMULA ONE WORLD CHAMPIONSHIP™, will be roaring on to the Mac later this year. The first FORMULA ONE™ racing game to appear on the Mac in over ten years, F1 2012 is a thrilling recreation of motor sports’ most demanding competition.

Team Feral’s race engineers are currently optimising the F1 2012 minisite so that it handles perfectly in all weather conditions. We’ll shout as soon as it emerges from the pit.