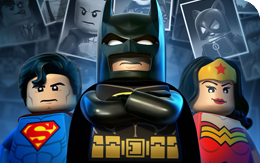 LEGO Batman's Back on the Mac, and This Time He's Got Company!

Grab a cape, adjust your mask and check your utility belt, because LEGO Batman 2: DC Super Heroes is out on the Mac today! Take to the streets (and the sky) with Batman, Superman, Wonder Woman and the rest of the Justice League to rescue Gotham City from chaos at the hands of Lex Luthor and the Joker.

Featuring a specially-written story by TT Games set in the LEGO series’ first open world, this is the biggest and best LEGO game yet. Find out more about it, meet the Justice League and gaze in wonder at incredible screenshots over at the LEGO Batman 2: DC Super Heroes minisite.