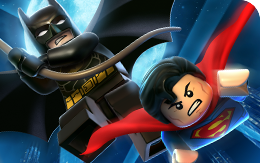 Yes, LEGO Batman is back on the Mac on September 6th in LEGO Batman 2: DC Super Heroes, and this time he’s brought the Justice League with him, including Superman, Wonder Woman, Green Lantern, Aquaman and of course, Robin!

In a brand-new DC Universe story written by TT Games, Joker and Lex Luthor team up to wreak havoc on Gotham City, and it’s up to Batman and the rest of the Justice League to thwart their villainous plans. Players will need to use all the heroic powers at their disposal to save Gotham City, the LEGO series’ first open world.

To find out more about the story and the characters in the game, fly, run at super-speed or drive the Batmobile over to the LEGO Batman 2: DC Super Heroes minisite.