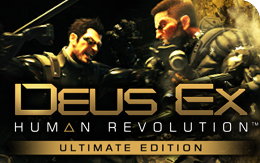 The Ultimate Edition uncovers new layers of conspiracy with The Missing Link, a separate adventure that sheds new light on the events of Deus Ex: Human Revolution, and the Tactical Enhancement and Explosive Mission expansion packs, which contain a new mission and extra weapons and items for Adam Jensen to use in-game.

Gaze into a blinding future where cybernetic augmentations blur the boundary between man and machine by staring directly at the fully-augmented Deus Ex: Human Revolution - Ultimate Edition minisite.