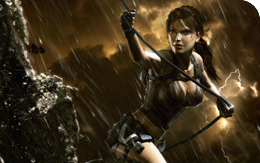 Lara Croft Makes an Intrepid Return to the Mac!

Grab your guns, grapple and passport because gaming’s most fearless action heroine is about to embark on another daring expedition to the Mac.

Tomb Raider: Underworld takes Lara Croft on her darkest adventure yet. From the crystalline waters of coastal Thailand to the rain-lashed jungles of Mexico and on to a mysterious sunken city deep beneath the Arctic sea, Lara won't stop until she has opened the gates to the Underworld.