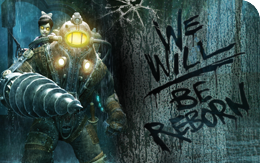 The Mac Plunges Back Into Rapture

Wake up Mr. Bubbles! We’re pleased to announce that BioShock 2, the sequel to the genetically enhanced shooter BioShock, will surface on the Mac in February 2012.

Set in an alternative 1968, BioShock 2 plunges players back into the ruins of Rapture, the undersea city built as a radical experiment in libertarian government that collapsed into a vicious civil war. Ten years later, in a repudiation of its founding ideology, Rapture has fallen under the control of collectivist visionary Sofia Lamb and her religious cult, The Rapture Family.

To venture further into Rapture’s leaking corridors, get to a bathysphere and make your way over to the BioShock 2 mini-site. You can pre-order the boxed version of the game today from our store, but if you've yet to visit the sunken metropolis, select download stores, including Gamersgate, MacGames.fr and Gamefly will be offering BioShock with BioShock 2 as a bundle deal.