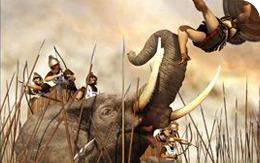 Like an armour-clad elephant slamming into a panicked enemy battalion, Rome: Total War Gold Edition has arrived! The legendary game of campaign strategy and battlefield tactics is our latest Feral Legends release, long requested by Mac users and finally available on our favourite platform.

Rome: Total War begins at the dawn of the Roman Empire, with several families vying for favour with the senate. As the head of a family you start to use your influence and manpower to take over towns, cities, Rome itself, and finally the known world! The campaign map lets you chart your progress on a grand scale, while the battle system lets you control your troops’ movements with unparalleled precision. This Gold Edition also includes the Barbarian Invasion expansion pack, which adds a new campaign and even more playable factions.

You can find out everything there is to know about the game on the Rome Minisite. When you think you’re ready to go from zero to Nero, Rome: Total War is available from our webstore now, and all other Mac game retailers within the next few days. Ave!