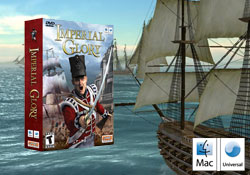 After a long fought campaign stretching over three continents and several hardware configurations we are happy to announce that Imperial Glory is finally on the march. The game is available to buy in all good Mac retailers with immediate effect or buy it directly from the Feral webstore.

Imperial Glory is a strategy game based in the Napoleonic era; you start out controlling one of the leading empires of the day  and over the next 200 years you have to use either your military or diplomatic skills to dominate the European and African continents.

The game ships as a Universal Application and runs on both Intel and PPC machines. The game requires at least an Mac running 10.4, with a 1.6Ghz+ CPU, 512MB of System RAM, Graphics card with 64MB of RAM* and 4GB of free space on your hard disk (*Intel machines running the integrated GMA950 are not supported).

A demo of the game will be made available early next week.