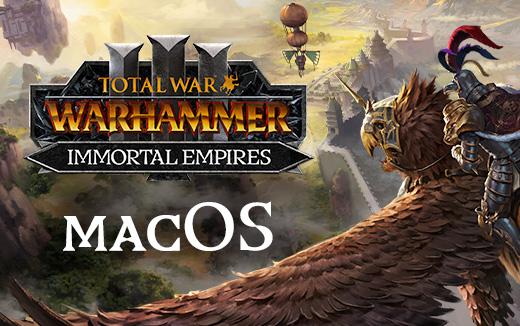 Immortal Empires combines the already gigantic campaign maps and varied factions of WARHAMMER I and II, with new locations and seven new races from WARHAMMER III. It’s the most ambitious Total War release yet, and this is only the beginning… Find all the important details on the Total War Blog.

Also newly available are the Champions of Chaos DLC, bringing four new Ruinous Lords into the fray — and Blood for the Blood God III, which unlocks bloody effects and brutal animations for WARHAMMER III’s brutal battles. Head to the Total War Blog for the full story on each of the DLC packs.

Update 2.1 for macOS incorporates all recent Windows updates up to version 2.1.2.

The entire Total War: WARHAMMER series for macOS can be found on Steam now!