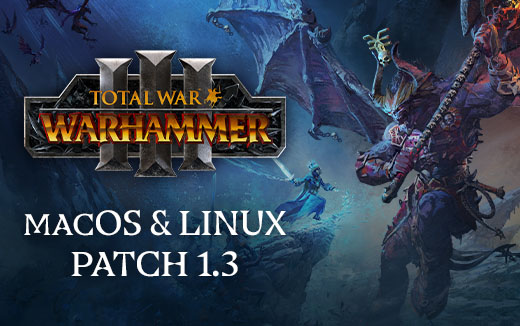 Heed the banner call and return to the Realms of Chaos! Total War: WARHAMMER III update 1.3 has rolled out to macOS & Linux.

Alongside a hefty list of tweaks and improvements to the game, the latest roster of Regiments of Renown units has been introduced across all seven factions, this time focusing on decisive mounted might. Look out for Kislev’s Oath-Brothers of Tor, who ride into battle on furious warbears and smite their enemies with blinding lightning strikes!

Work has also gone on under the hood to improve battle AI, unit responsiveness, character traits and skill trees — rounding off a sizable change list, which you can read on the Total War blog. This patch incorporates all changes up to The Creative Assembly’s hotfix 1.3.2, including reverting unintended changes to ranged unit behaviour.

What are you waiting for? Simply launch Steam and your download should begin automatically. See you on the battlefield!