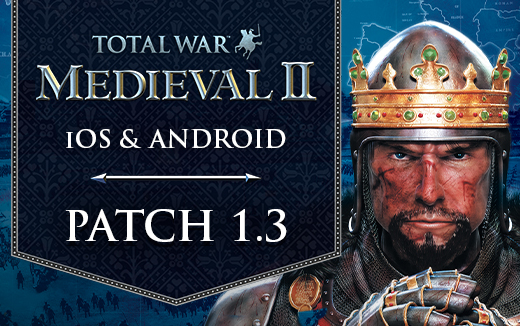 After much smelting of 0s and 1s and the clanging of electronic hammers, Total War: MEDIEVAL II for iOS & Android has emerged from the armourers, sporting a shiny new patch.

Update 1.3 brings a number of much-requested quality of life features, including screen rotation for devices with camera notches, and the ability to hide the battle interface - so handy for taking those dramatic screenshots in the heat of the melee.

Our finest codesmiths have also improved touch gestures for easier fingertip control in battle, while addressing a number of crashes to offer a smoother overall experience. Players will also notice a big improvement to the time taken by AI factions when performing their turns.

We now turn our focus to the Kingdoms expansion, and look forward to sharing more about it later this year.

Head here for the full changelist, or charge straight to your app store of choice to download the update today. Battle awaits!