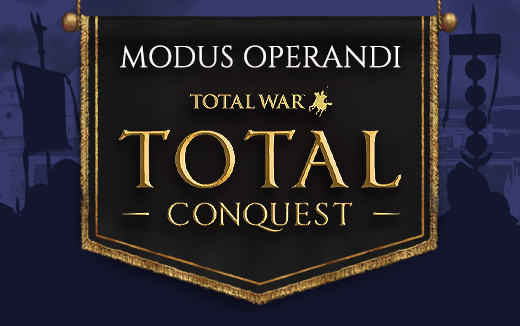 With Total War: ROME REMASTERED, the goal was to give a huge update to a classic game and cement its legacy for years to come. For that reason, a focus of post-release development has been to work directly with modders, listen to their feedback and empower them to create more ambitious works than ever before.

With the game’s final update providing a host of new possibilities for modding, it seemed a perfect time to shine a spotlight on some of the very talented people working for the greater glory of Roma invicta!

Zbigniew (Ziggy) Kajota, known in the community as kommissar, is the leading talent behind one of ROME’s most popular mods – Total Conquest, and his roots in the Total War series run deep:

“I've been a big fan of the Total War games ever since I played a demo of Shogun, some 20 years ago… I remember sending an email to one of Creative Assembly’s lead developers asking what steps someone my age should take to make games as awesome as they do. I should really thank them. They suggested modding and literally changed my life!”

When we asked what it was that made the modding scene of Rome so enduring and how the Remaster had changed things, Ziggy praised the game’s versatility:

“It was a game about ancient Rome, but with a bit of work (a lot of work actually) you could turn it into something completely different. I've saved Britain from the Vikings, been to Medieval Europe, conquered Middle Earth in Sauron's name, and liberated it the second time around - not many titles let you do all that.

Remastered deals with many of the problems the original game had, making modding easier. I hadn't modded the original for almost a decade, but coming back I found myself right at home. It's also amazing to see Feral expanding the horizon even further and listening to modders. Work can be done faster than before (scripting especially) since we get much better logging systems.”

We asked Ziggy to tell us a bit about the Total Conquest mod, and who he felt it appealed to:

“I like to think of Total Conquest as a Vanilla Expansion for those who just want "a little bit more". It adds new settlements and expands the map further east (credit here goes to Mundus Magnus). It unifies the Roman Houses and in their place, adds in two new factions. There are also some experimental features, such as national laws, a Seleucid Decadence system and a Parthian invasion script to give it a bit more flavour.

[Using changes introduced in ROME REMASTERED] we also went way over the province limit. I think original Rome supported something like 199 land provinces, if I remember correctly. Total Conquest, at present, is already over this limit. Vanilla has 101 provinces, and Total Conquest stands at 216!

It’s been very difficult to keep new and exciting features quiet, but I made good use of the expanded limits on factions as well! At the moment, Total Conquest has some 40-odd factions, some of which will only appear when certain conditions are met. Expanded superfactions and scripting allowed me to create a completely custom civil war system for the Romans, which has never been possible before! You’ll also find some cool scripts, like an event for the integration of Etruscans into the Roman Republic.”

Ziggy is also keen to experiment with bridging the gap between the base game and the Barbarian Invasion expansion to create one continuous campaign, as well as bringing that expansion’s features into Total Conquest using Combined Mode introduced in update 2.0.2. It’s an ambitious agenda and there is plenty of scope to get involved:

“I think modding is a wonderful learning tool for young people, and if you're a parent reading this, get your kid involved! I'd like to thank all the modders doing absolutely amazing work, without which Total Conquest wouldn't be where it is, especially Makanyane and wilddog. Shoutout to all modellers and graphic artists out there: I'm in need of help, so if you're interested in helping Total Conquest grow, feel free to reach out!”

So whether you are ready to lend your skills, or you just want to dive straight into the Total Conquest action, head to the Steam Workshop. And be sure to check out Ziggy’s other project!

To see the full (and really rather long) list of changes made in Total War: ROME REMASTERED update 2.0.4, check out the patch notes here.