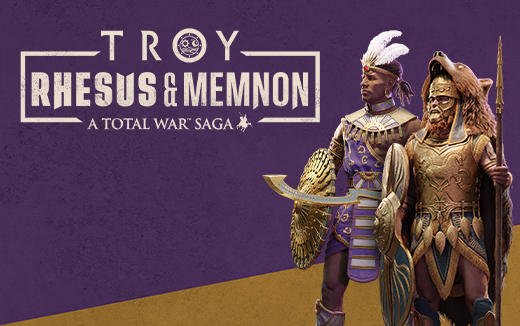 Today, the battle for Troy is joined by two more heroes, and the complete cast is now assembled for the era-defining confrontation of the ancient world.

From the north rides Rhesus, mighty lord of Thrace. From the south, the warrior king Memnon sails his mighty Aethiopian horde. Each one has pledged a diverse force to the Trojans’ aid, with brand new faction mechanics, buildings and an impressive 49 new units between them.

A Total War Saga: TROY’s bundles have also made a triumphant return to Steam and the Epic Games Store, bringing, for a limited time, a heroic 40% saving on the Ultimate Edition of the base game, Rhesus & Memnon, and three more DLC packs to complete the package.

Buy Rhesus & Memnon from Steam or the Epic Games Store today, unleash their forces and defeat the Achaeans once and for all.