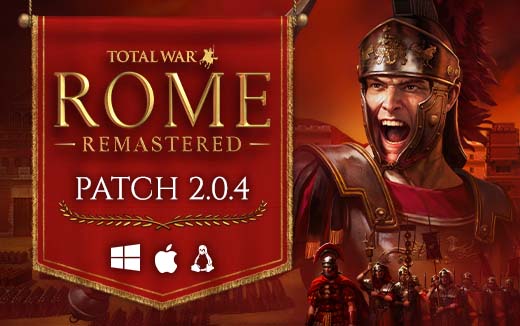 After a successful stint in beta, ROME REMASTERED patch 2.0.4 is now available!

This update brings with it a legion of expanded modding capabilities, as well as a cohort of interface improvements, tweaks to AI, sound and more. The full changelog is far too long to detail here, but you’ll find a complete rundown over on the Total War Blog.

The post-release development of ROME REMASTERED, has focussed on ensuring the game’s legacy rivals that of the great city itself, by empowering a fantastically talented and thriving modding community to make ever more ambitious additions for many years to come.

To that end, previously hardcoded caps to the number of possible cultures, building types and, the one you’ve all been waiting for, factions have now been entirely lifted (well, unless you want more than 4 billion of each!). This, alongside many, many other new capabilities (detailed in the patch notes), opens the door to total conversion mods of a size and scope limited only by the modder’s imagination.

Patch 2.0.4 is the final planned content update for Total War: ROME REMASTERED, but the game will continue to be supported to ensure stability and compatibility as required. Not only that, but we’ve been working directly with a number of modding teams, and as a result, many of them have public releases of their projects going live today. We’ll be sharing their work on Facebook and Twitter in the coming days, so be sure to follow us there.