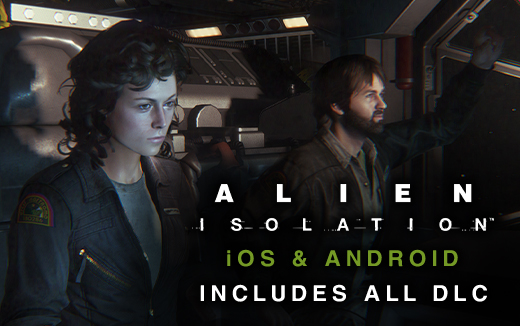 Discussing the bonus situation – The DLC of Alien: Isolation

The upcoming release of Alien: Isolation for iOS & Android includes not only the complete survival horror classic – but also all seven DLC packs at no extra cost.

The pick of the bunch are Crew Expendable and Last Survivor, which reunite the crew of the Nostromo from the 1979 film ‘Alien’ – with Sigourney Weaver and castmates returning to lend their voices to the roles they made famous.

Crew Expendable gives the player a choice of protagonist, as they recreate the crew’s attempt to isolate and capture the Xenomorph. It offers a tense one-on-one with the alien, packed with claustrophobic scrambles through the Nostromo’s cramped depths, and the ever-present danger of a deadly encounter.

Left with no other option but to destroy the Nostromo and the alien along with it, Last Survivor tells the tale of Ellen Ripley’s desperate escape to the shuttle as the self-destruct countdown looms over her. Balance speed and stealth with the judicious use of your flamethrower in this high-stakes game of cat and mouse.