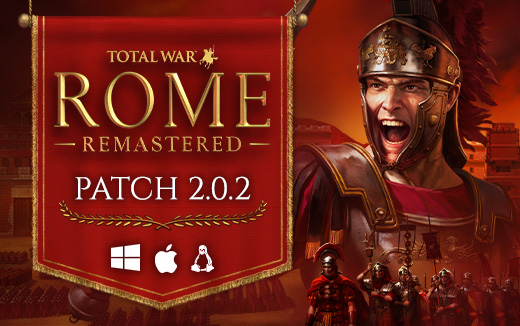 Avē! We who are about to update salute you!

The Total War: ROME REMASTERED patch 2.0.2 is now available on Steam. This update brings with it an Emperor’s ransom of improvements to modding, UI, audio and localisation.

You can unfurl the full change-scroll over on the Total War Blog, but two particular highlights are the new Combined Mode and Increased Limits.

Combined Mode allows modders to take advantage of features of ROME REMASTERED and its expansions in a single mod. That means swimming, shield walls, religions, loyalty and more can now be combined for truly expansive conversion mods.

Plus, with previously hardcoded limits now removed, mods may incorporate a (virtually) unlimited number of units, map regions and resources — with an increase of the faction limit to come in a future patch.

Patch 2.0.2 will download and install automatically the next time you fire up Steam.