This royal throne of kings, this sceptered isle... this precious stone set in the silver sea

In the aftermath of the great Viking invasion halted by King Alfred, British natives and Scandinavian settlers find themselves in perpetual conflict.

Direct the fight for Early Medieval Britain from the snowbound highlands of Scotland to the green battlefields of Kent. Defend, develop and expand your territory across a beautifully detailed and historically accurate Campaign Map. 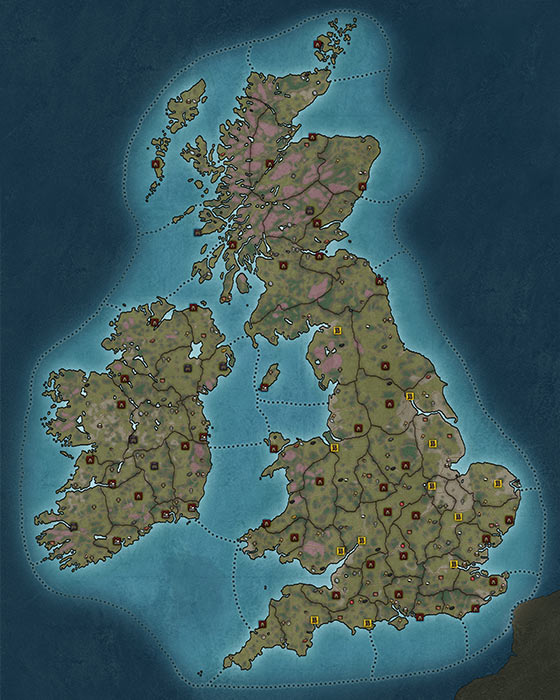 Vibrant commerce and abundant farmland dominate the south of England. The coastline has many bustling trade wharfs full of wealthy merchant vessels. However the riches of the region makes it a prime target for opportunistic raiders from overseas…

The marshy lands of the Danelaw are rife with cultural tension - the settled Vikings frequently clash against the local Anglo-Saxon population. The wetlands drive the local population further inland to the large tracts of fertile arable land, whilst the coastline is littered with many
a plundered monastery.

Magnificent mountain ranges and pockets of dense forest act as natural defences to the clans of Scotland. Also ports on the East and Western coast offer excellent trading opportunities. That so, the climate can be harsh and resources are sparsely spread which can hamper any ambitions
of rapid growth.

Romano-British culture continues to flourish in Wales. The south is full of fertile farmland, whilst the west and North are littered with gold and lead mines. The eastern border is dominated by conflict between the native population and the Anglo-Saxons, though the dense forests and mountainous regions make it difficult for armies to manoeuvre.

Dense fields of heather beautify the landscape of Ireland and the many pastures provide ample grazing opportunities for cattle. Precious metals are mined all over the island, and a bustling gold mine provides many riches in the North. Heavily fortified Viking settlements line the Eastern and Southern coastline of Ireland.