MIDDLE-EARTH: SHADOW OF MORDOR GAME OF THE YEAR EDITION © 2014 – 2015 Warner Bros. Entertainment Inc. Originally developed by Monolith. Developed for and published on Linux and Mac by Feral Interactive Ltd. © 2014 – 2015 New Line Productions, Inc. © The Saul Zaentz Company. MIDDLE-EARTH: SHADOW OF MORDOR, THE HOBBIT, and the names of the characters, items, events and places therein are trademarks of The Saul Zaentz Company d/b/a Middle-earth Enterprises under license to Warner Bros. Interactive Entertainment. Linux® is the registered trademark of Linus Torvalds in the U.S. and other countries. Mac and the Mac logo are trademarks of Apple Inc., registered in the U.S. and other countries. Feral and the Feral logo are trademarks of Feral Interactive Ltd. All other trademarks and copyrights are the property of their respective owners. All rights reserved.

Middle-earth: Shadow of Mordor Game of the Year Edition
contains all DLC previously released for the game:

Ride bile-spewing Wretched Graugs and stealthy Caragaths in Lord of the Hunt,
which also contains the Beastmaster skin, unique runes and the Test of the Wild challenge mode. Set thousands of years
before the main game, Bright Lord casts you
as the Elven Lord Celebrimbor and challenges you to wield the One Ring in a climactic
battle against Sauron himself.

Carve your name across online leaderboards with these four challenge modes. Prove
your strategic abilities against Sauron’s most highly-trained legion in the Test of Wisdom, race to bring down your enemies in the Test
of Speed, wield your might with the Test of Power, and slay continually-spawning hoards
of Uruks from the pits of Barad-dûr in the Endless Challenge.

Wipe out marauding
gangs of Uruks to earn their unique runes! Take on the flaming crossbow-armed Flesh Burners, the Blood Hunter assassins, the heavily-armoured Skull Crushers, and the dual
axe-wielding Beserkers.

Embrace the Shadow as
the hooded Dark Ranger
and embrace Gondor’s
noble heritage as the Captain of the Watch. 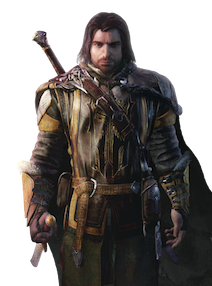 Ignite your blade with the Flame of Anor, deal extra headshot damage with the Deadly Archer, make your stealth attacks even more lethal with the Hidden Blade, use unlimited combat finishers with the Rising Storm, and increase the power of your special attacks with Orc Slayer.

Strike terror into your enemies as Sauron’s most fearsome servant with Power of the Shadow, which contains a Black Hand skin and new Epic runes. Face Sauron’s elite Defenders before the Black Gate for a chance to earn the Wolf’s Head rune in the Guardians of the Flaming Eye mission. Become
Elf-warrior Lithariel with Power of Defiance, which contains a new skin
and a challenge mode, and apply the highest-resolution textures available with the HD Content.