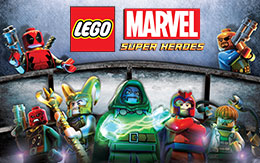 Face front, True Believers - the superpowered brick-bustin’ action of LEGO Marvel Super Heroes for Mac is now yours for the taking!

Play as your favorite heroes - the Avengers, Fantastic Four, X-Men, you name ‘em, this game’s got ‘em - in a brand-new block-bashing adventure spanning the entire Marvel Universe! Want to master the amazing abilities of over 100 characters, from Spidey’s web-slinging to Professor X’s mind control? Want to team up with a buddy and defeat the bad guys together? Want to hunt down secrets in a massive LEGO Manhattan? Sure you do, so grab your copy at the Feral Store today.

Not enough Marvel for ya? Unleash the powers of the heroes and villains of Thor: The Dark World with the Asgard DLC pack and reassemble your Marvel roster with the Super DLC pack, containing eight mighty characters, two vehicles and ten races! The Asgard and Super DLC packs are included in the Mac App Store version.

One last thing, gang: remember to pay a visit to the LEGO Marvel Super Heroes minisite for all the key features, character info, media and system requirements a Marvelite could ask for. Excelsior!