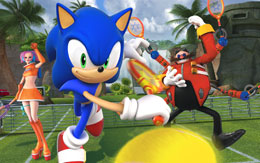 Anyone for SEGA Superstars Tennis? Good, because we’re releasing it for the Mac on October 17th!

This extreme take on arcade tennis sees Sonic and the gang face off in mad matches, compete in crazy tournaments, take on wacky minigames and partner up for very mixed doubles, all on colourful courts inspired by SEGA’s sumptuous gameworlds.

We’ve served up even more game info, screenshots and system requirements at the SEGA Superstars Tennis minisite, and you can pre-order the game right now at the Feral Store.