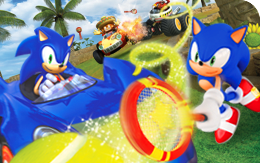 It’s going to be a Sonic Summer on the Mac!

Summer always seems to go by in a flash (especially if you live in England), and it’ll be even faster than usual this year for Mac gamers because Sonic the Hedgehog and over 25 other favourite SEGA characters are racing on to the Mac!

Yes, Sonic & SEGA All-Stars Racing and SEGA Superstars Tennis for Mac will be arriving this summer! In each game, a star-studded lineup including Doctor Eggman, Tails, Shadow the Hedgehog, Alex Kidd and Aiai the monkey will battle it out on race tracks and tennis courts inspired by the mega inventive worlds of SEGA games.

We’re especially excited to announce that both games will feature online multiplayer modes that use Apple’s Game Center technology, a feature of the next version of Mac OS X, Mountain Lion.

Dr Eggman is working on minisites for each game, and when we hear word from his labs that they’re ready, you’ll be the first to know.