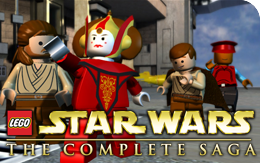 Attention, citizens of the Galactic Empire: Like Han Solo freed from a block of carbonite, LEGO Star Wars: The Complete Saga is released today! The game combines the prequel and original trilogy games into one seamless journey, from Anakin to Vader, and Jar Jar to Death Star, but with a bricky twist. The brick-bashing gameplay comes in solo and co-operative flavours, and there’s a whole load of new levels, challenges and characters smuggled in that you won’t have seen before, as well as freshly polished graphics to make it look better than a wookie in a salon.

So, if you think you can manage the Kessel Run in under 12 parsecs with nothing but a few hundred LEGO bricks and some sore fingers, head over to the store (galactic credits accepted) and grab yourself a copy now! Or if you’d like to know more, take your X-Wing over the force-infused swamp that is the Saga mini-site.