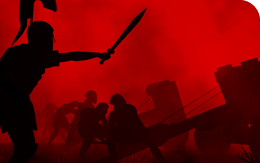 They say that Rome wasn’t built in a day, and we’re certainly not going to disagree. However, we are delighted to announce that Rome: Total War Gold Edition for Mac will be available to buy from our webstore and all good Mac game retailers on February 5th.

A strategy game on an epic scale, Rome: Total War has you seize control of the armies of Rome, doing the bidding of the senate, rising through the ranks, and eventually overthrowing your masters to become the emperor! The game blends strategy and tactics to give you absolute control over your campaign, over each battle, and over every unit of troops. Making this the Gold Edition is the inclusion of the Barbarian Invasion expansion pack, set in the twilight years of the empire with new factions and campaigns to play. For more about the game, screenshots, videos and desktops, all roads lead to the Rome minisite.

Thank you to everyone who has inquired, encouraged, badgered, begged and finally preordered for their patience while we have spent the time to make sure that this release is worthy of the Total War name. We promise it’s been worth the wait.